How to Make a Harley Quinn Costume Guide

To get the look of Harley Quinn, you can go a few different directions. She’s often portrayed wearing a red and black full-head jester’s hat with a white face, black mask, and alarmingly red lips. Other times, she has no headgear on at all, and her hair is parted into two playful ponytails you can dye fun colors a la Margot Robbie in the upcoming Suicide Squad film. 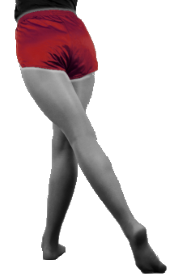 Depending on the artist, Harley Quinn is usually depicted wearing a red and black corset. Try this inexpensive blank and white bustier and add your own red and purple details. If you want to stay warm during Halloween, slip a white lab coat over your corset to reference Harley’s past as an Arkham Asylum psychiatrist. Or try an asymmetrical red dress for a fit and sexy take on the character. Have fun with it, the more chaotic the better.

Who wears short shorts? Harleen Quinzel wears short shorts. In the upcoming Suicide Squad film, Margot Robbie wears sparkly half red, half blue shorts. Hardcore cosplayers can find two pairs of economical short shorts, cut them in half, and sew them back for ultimate mismatched mayhem.

Harley Quinn is often portrayed wearing fishnet stockings, and the black diamonds that characterize her are tattooed onto her leg. You could wear two-toned

stockings or playing card stockings to make this look your own. Go nuts and add layers, if the weather calls for warmth.

Any pair of red and black shoes or boots will do just fine. Heels work well for a night out wreaking havoc with Mistah J. Use striped or solid black leg warmers with an easy snap side feature to add length to your legs and invoke the lace-up heels the new Harley Quinn stomps around in.

Grab a deck of playing cards and a baseball bat. Harley Quinn is a wildcard as far as characters go, and your costume should reflect that fact. Decorate the bat to look kooky-threatening with stripes and colors. Cosplay doesn’t have to stop at dressing up like the character. Really play the part (without actually breaking the law).

Harley Quinn is one of the most loved villains in all the DC Universe. A DIY Harley Quinn costume isn’t often seen on the streets, but that may change soon, since DC Movies is soon releasing Suicide Squad, in which Harley Quinn is finally brought to life on the big screen. Make your DIY Harley Quinn costume before everyone else! Join up with Mistah J or Poison Ivy for a comic-inspired couple’s costume. Or have a friend go as the Boy Wonder and fight all night. Make sure you have your whole squad ready for Halloween or Comic Con mischief making.